I bought tickets for the XCO Mountain bike World Championships in March, it was touch and go if I was going to go or not, I couldn't find anyone to travel with me so I had to first deal with traveling on my own for 5 days.

I started looking for flights and the timings seemed problematic two weeks before the event, I was ready to pack it in, BUT then I saw a tweet, 50000 fans at Nove Mesto Na Morave and I thought I really want to be one of them! I told Jules I won't be going and she said, "No TC you have to go, you will love it." So back was the doubt about what to do, so I procrastinated for another week.

The next Friday I was ready to pack it in again, but then thought stuff it I'm going. I found flights on E-bookers with 2 different airlines and the timings worked, but then realised schucks 50000 people I need to find accommodation before I can book my flights. It took about 12 emails before I was successful in finding a place.

I also managed to rent a bike the night before I flew which enabled me to ride the marathon the day before and gave me something to keep myself busy.

On Thursday afternoon I flew to Prague picked up a hire car and drove to my accommodation.

I arrived at Nove Mesto Na Morave at 8:15 on Friday, registered for the race and met Petr at the race village to get my racing machine from him.

Like I've said before, once you ride a full suss you can't go back! My current bike vs the one I rode on Friday was like comparing a Ferrari with a Ford!

Anyway I was grateful for some wheels so that I could ride.

I never thought I'd say this, but I missed people speaking English in the same way I miss speaking Afrikaans after a long week at work. I couldn't find the drop clothes bit in time so stuffed my baggies and baselayer in an already full camelbak.

Since Wales I haven't eaten Clif Bars again as my stomach can't stomach them anymore so I had my trusty boiled potatoes and cashew nuts in my back pockets.

We set off from the same tarmac and under the start banner of the XCO riders into the woods.

As you would be expecting I went off course after 4km and took a few people with me, I followed the wrong red arrows which caused me to turn around and I headed back againdt thr flow of the trail to connect with the route again. I assume a few people had a go at me, but I was blissfully unaware or ignoring it as I didn't understand a word they said.

I was also bouncing around like crazy, so stopped to let some air out, I don't know why I didn't check that?!

The tyre pressure was about the only suspension I had so I was happier for the softer ride after deflating tyres. Shortly after that I was rolling along a flat in my big gear when the bike came to a halt, I thought this is it, the chain had no slack in it and I couldn't get it to move forward, I was scared it was going to snap. Normally or should I say naturally I'm impatient but thought to myself, chill out and try it to drop to the smaller gear calmly. It finally dropped and I was on the go again.

The course was along fire roads through farmland and woods.

I rode most of the way on my own, I tried to make friends or say hallo along the way, the majority was not so keen to speak, but some were friendly back.

We went up a muddy climb and off course this bike created a chain suck problem instantly when the mud and chain connected! I stayed in my granny gear (small ring at the front) for most of the time just to avoid jamming the chain. I had a choice of completing at a slower pace or allow it to get the better of me. It did annoy me, but it didn't get the better of me.

At the feed zone I came across more non-English speaking Czechs, but thankfully where food or water are involved it is easier to get the jest of things.

I always do better after the halfway mark of a race as mentally I coax myself to the finish line with less than half way, last 10km, last 4km, last 2km WHERE is the finish line?

The latter part of the route involved more singletrack, not too hectic, narrow fast and rooty and rocky in some places, there were also longer climbs, but nothing hectic. The final part of the course went past some beautiful lakes before we headed through the forest bit down to the Finish line past another lake. 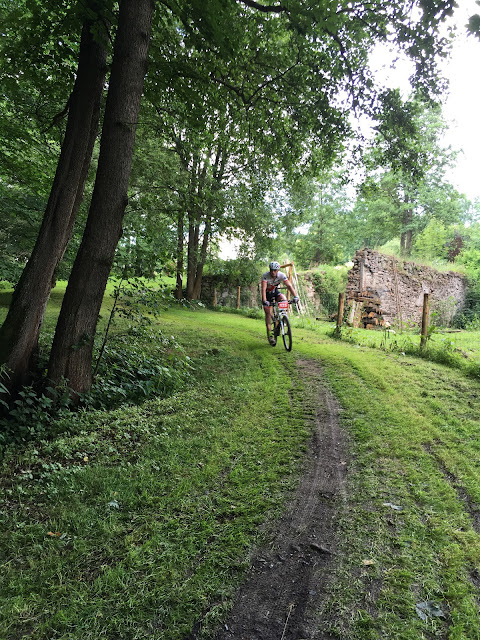 I'm so glad I had the opportunity to ride in the Czech Republic and I can't wait to ride my own bike (Ferrari) again.

Birell handed out cold non-alcoholic beer at the finish line and we also received a lunch ticket for after the race.

I managed to lose my lunch ticket and found it an hour later again where I dropped it. It was a miracle! It was easier to find the lunch ticket that I lost than the 'Large tent' where lunch was served...! I finally found it after I went to the information desk.

The rest of the afternoon I spend watching the Juniors on TV in Hotel Ski which are on the premises as I was just too tired to run around on the course. This was the hotel where most of the athletes stayed so on my way out I literally almost walked into legendary Julien Absalon, I carried on walking and tried my hardest to be cool as Zane suggested.

I was so proud of myself for 3 things this past weekend:

1. Travelling on my own
2. Driving on the wrong side of the road
3. Following the maps on my phone to the T!

Those that know me well will know that all 3 of those are small victories! One, I love people. Two, I usually say right when I mean left or the other way round. Three, well lets just say I don't like following instructions or someone telling me what to do!

A few random observations about the Czech Republic:

Check your Czech to avoid these blips:

1. I bought 4 liters of lemonade instead of 4 liters of water
2. I ordered a small glass of red wine and received the biggest glass of white wine ever