What better way to spend Bank Holiday Monday in the beloved Dorking...

3 of us hit out on the 8:43 train to Dorking, meeting us at the station is Darren & Amanda on a tandem mountain bike. This was the first time in my life that I've actually come so close to a tandem bike let alone ride one.

We (Cecilia, myself & Stephhe) met Amanda a few weeks prior at the start of Yoghurt Pots & she said that she would like to ride with us.

We took the Chalk Way down to the farm & connected with the 22, went down to Abinger, took the farm road down to the Volunteer & up to the car park at the bottom of the Telegraph. From there we took the bottom road with the 3 steep-short climbs over to BKB... Thankfully Zane came with & were able to keep up with this very capable duo, Liezl & I were catching up on some quality time & I was glad for her company as I was vrot from the previous day's ride through all the mud this mud island had to offer!

Hitting BKB I was trying to stay close enough to the tandem so I can see what happens when the 2 of them takes on the 2nd drop of BKB... Well I was in time to see how there heads disappear and off they went only for me to see them at the bottom again. Zane was saying how he was going flat out & they caught him right at the end.

Going into Peaslake, we met the  5 other riders that were joining us for our social ride. Lindie Gericke, Damian, Lee-Animal, Katy & Barry. An early teastop was in order & we sommer treated ourselves with an early cheese straw from Peaslake Village Store.

Amanda & Darren took us down some trails, some familiar, some not. It was at Yoghurt Potts that Darren asked me, "Do you want to have a go?" At first I wasn't sure what he was talking about & said yes before I knew what I said yes to. The next minute I was on the back of the tandem listening to his instructions as he briefed me.

Now if you have been cycling with me before you will know that Yoghurt Pots is my ultimate favourite trail... In all the years of mtb'ing, riding Yoghurt Pots after being away for a while, is like that welcome home feeling.

I have NEVER been down Yoghurt Potts so quickly. Sitting on the back of the tandem, not picking your own lines or steering your bike, listening (submitting) to instructions & following them was out of character for me, BUT with Darren clearly knowing what he WAS doing & giving such clear instructions (tree on your right - don't look at it, bump coming up, power & bail-bail-bail) , it was a ride of a lifetime. I LOVED it! 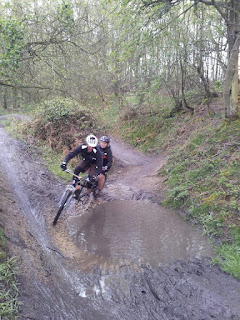 Zane & Liezl both also got a chance to have what we all thought in the beginning would be a piggyback ride at the back, we soon knew, that the backseat driver works as hard as the driver. 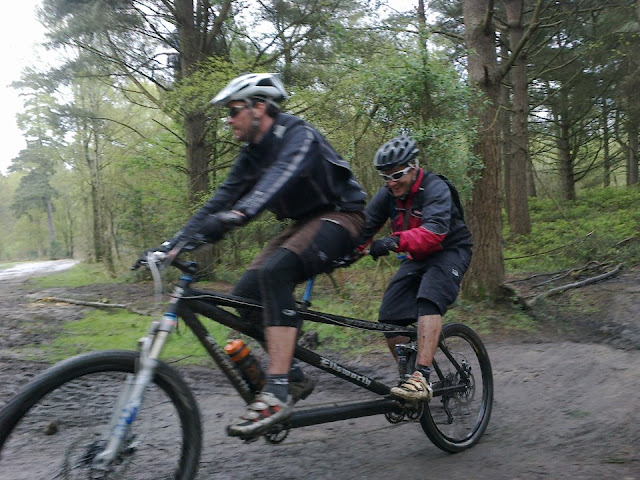 We went down to Peaslake for celebratory cakes & tea. Darren & Amanda took us back in to the station with a shortcut in the pouring rain. 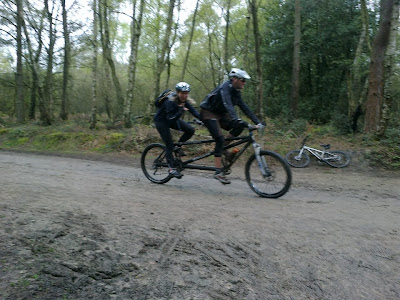 Darren & Amanda is in a league of their own. They are lovely, humble, supportive, helpful & fun to be around with. They had so much time & patience for us & it was great to spend the day with them. Thank you so much for a memorable day. 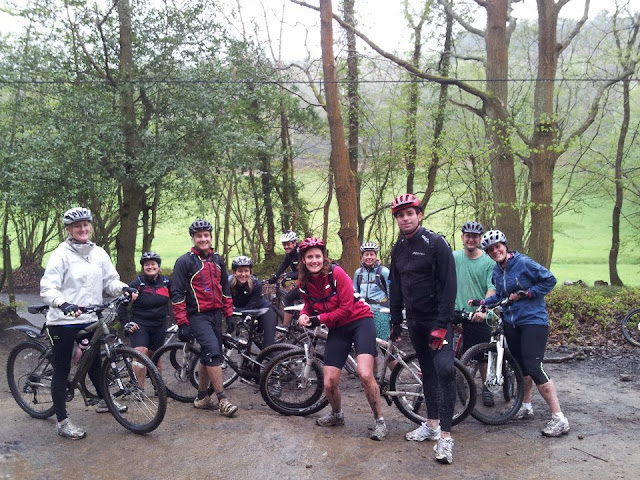